From the bride, Marianne:
Everything about our day had a ‘vintage’ feel, but there wasn’t much structure to it. I took somewhat of a gypsy approach: if I saw something that caught my eye – something I was drawn to (an old window, a picture frame, a vase, my dress), I got it and put it in my ‘arsenal’. The ‘garden’ came in with the flowers, obviously. I wanted them to be mixed, fluffy, full and layered. And, they were plentiful.  I also mixed a lot of hard with soft (i.e. – burlap and lace). That spoke a lot about who Kyle and I are: me – soft and feminine; Kyle – a little bit more ‘grit’, masculine, and old fashioned). The mixed textures were very interesting. Our music also spoke to our style, with modern-day alternative music mixed with some old-school classics. I was definitely inspired by the current trend of vintage weddings. I love that ‘old’ is back, and ‘thrift’ is in. If I think back, the first thing I decided I wanted to do was mix burlap with lace. Once I figured that out, the rest built from there. 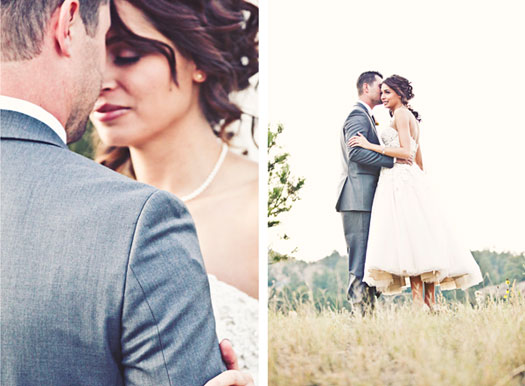 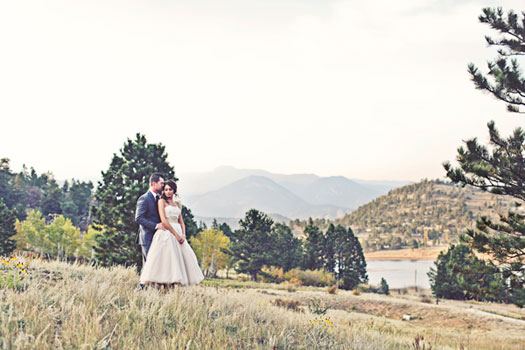 I made a conscious effort not to have specific ‘colors’. I am a graphic designer and I wanted to design my wedding the way I design on the computer. I chose a ‘dusty’ palette of colors including roses, yellows, off whites, grays, etc.; and mixed that with pops of rusty red and metallics. 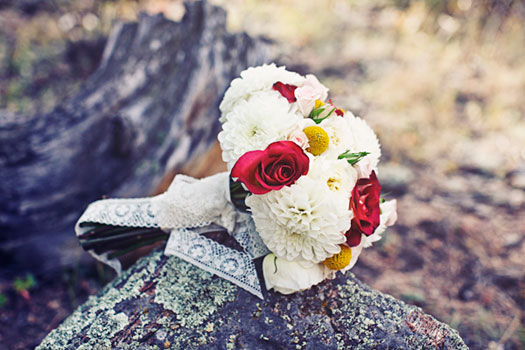 I was made fun of because I ordered probably 20 pairs of shoes… that’s what happens when you have a short dress!! 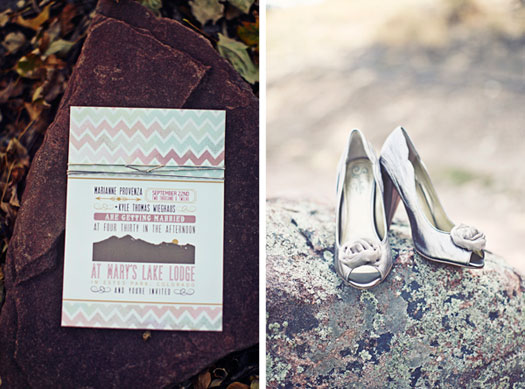 The invitations were printed on a cotton paper and wrapped in metallic ribbon. The envelopes were clear, which was cool, and I created a wrap-around sticker for the address label and topped them off with vintage stamps I bought on Etsy. 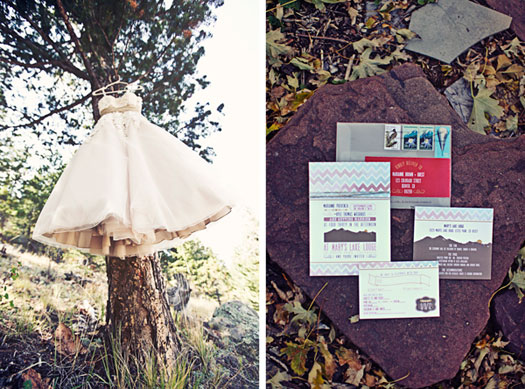 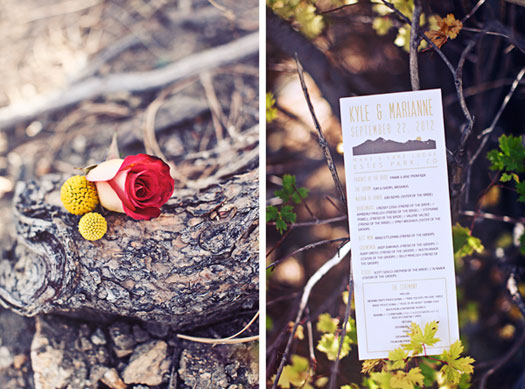 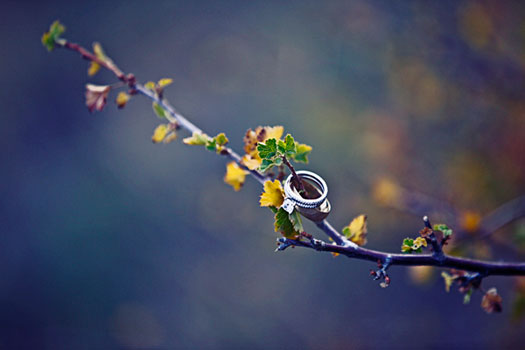 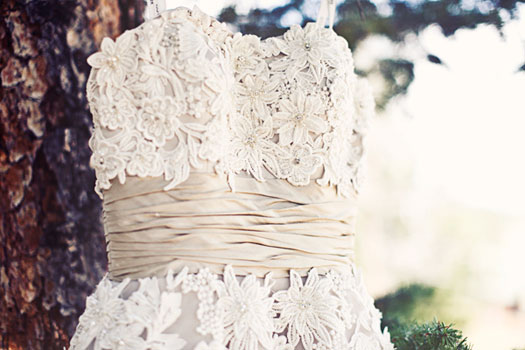 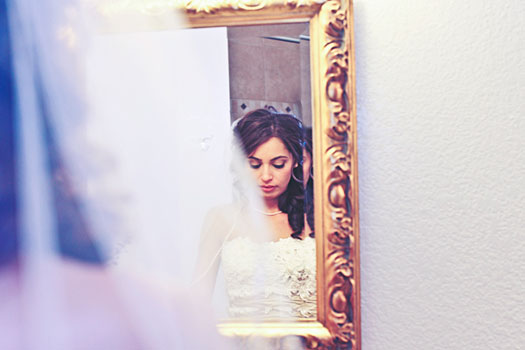 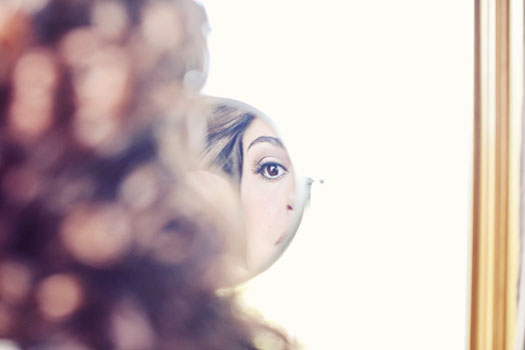 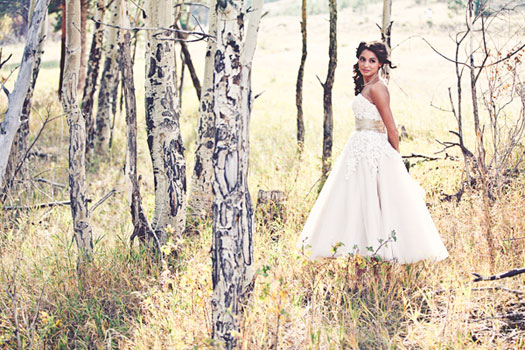 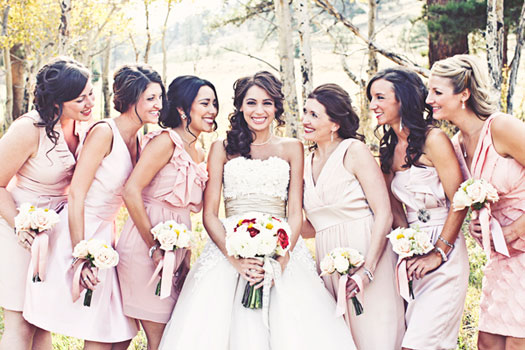 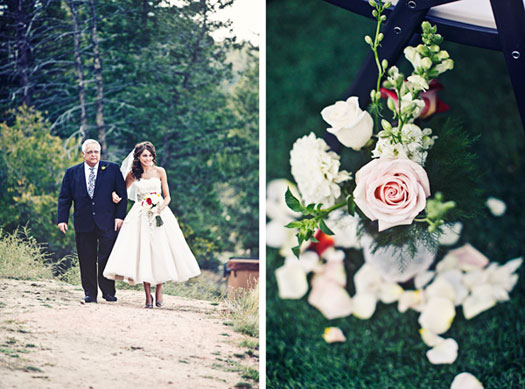 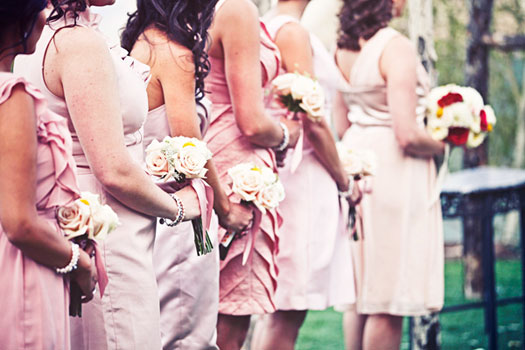 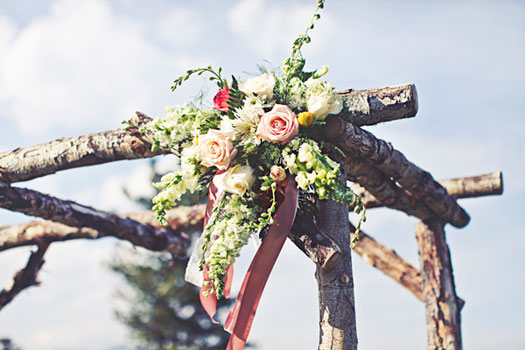 The ceremony was short and very sweet – two Bible verses were read by a friend and the vows were traditional. The main highlight for me was the smile plastered on the groom’s face the entire time. 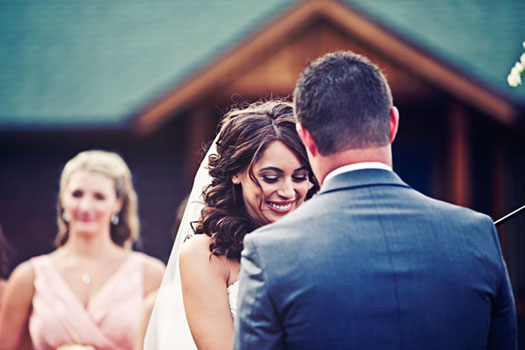 During the ceremony, we were told that a bull elk came down the side of the mountain near the ceremony site. Being that many of the guests were not from Colorado and had never seen an elk, that was pretty special. 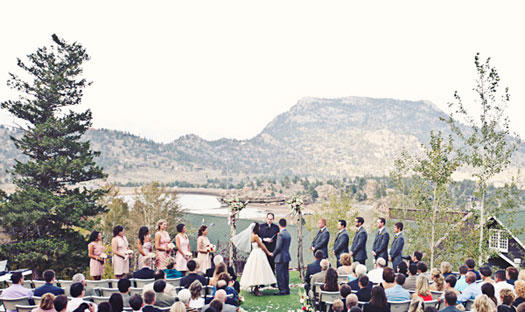 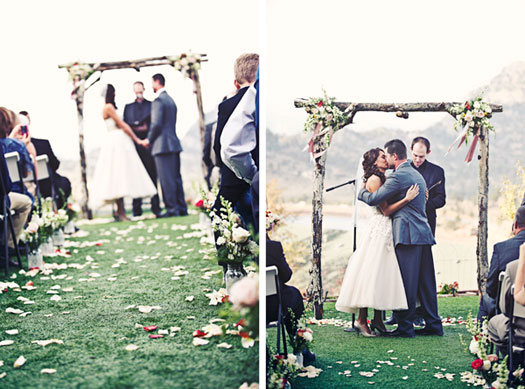 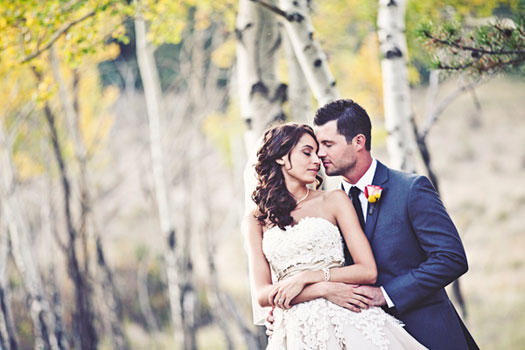 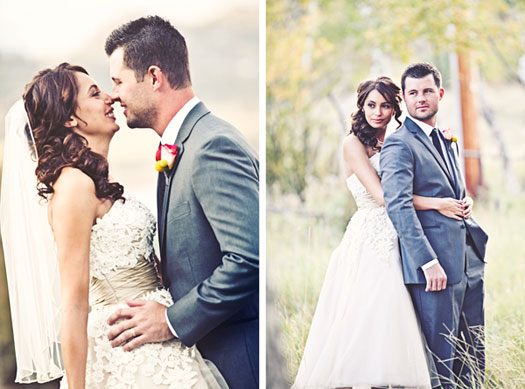 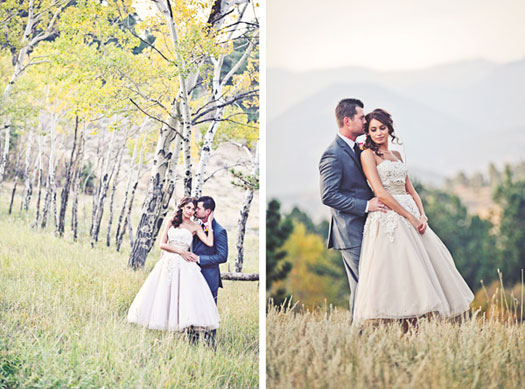 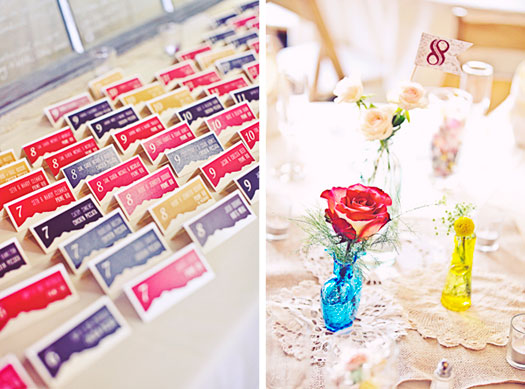 Each table’s centerpiece consisted of a square piece of burlap with an assortment of doilies laid on top. On top of that was an assortment of vases filled with flowers. It was beautiful and eclectic. It was also personal, because so many of the doilies and vases belonged to my and Kyle’s families. My mom made the table numbers out of scrapbook paper and dowel rods. 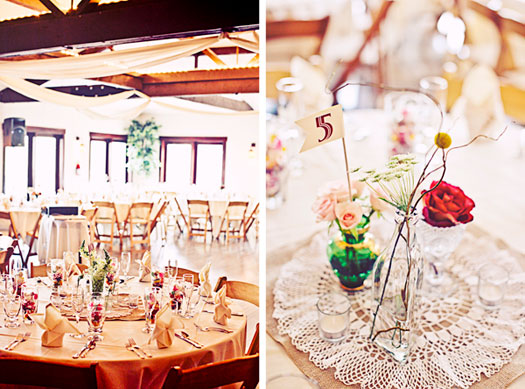 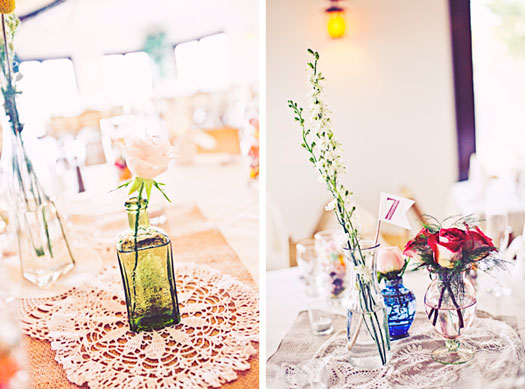 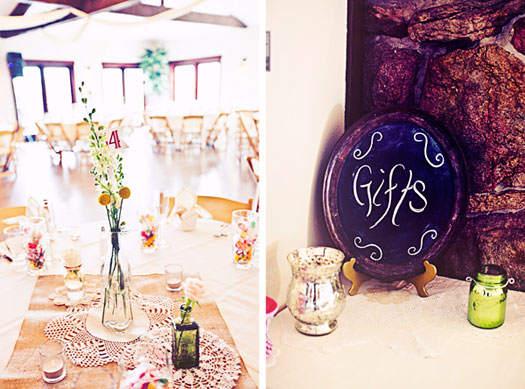 We went a little less traditional with the dessert: famous cherry cobbler and cinnamon rolls from the Glen Haven General Store (a near and dear place to the groom’s heart), along with mini-cupcakes (chocolate, carrot and poppy seed), ‘German Pockets’ and an assortment of cookies from Schmidts Bakery. We had a small, adorable cake to cut as well. I definitely recommend looking into dessert tables over the traditional wedding cake. Not only do you satisfy the tastes of everyone, but it looks amazing, and it can be much less expensive! 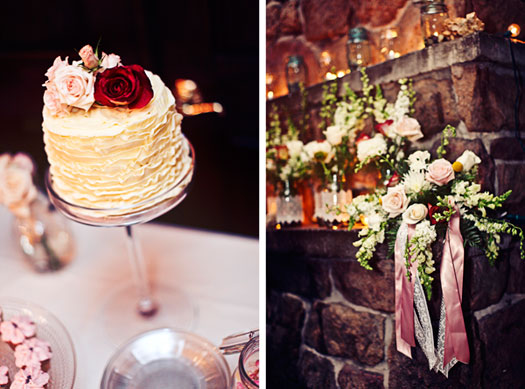 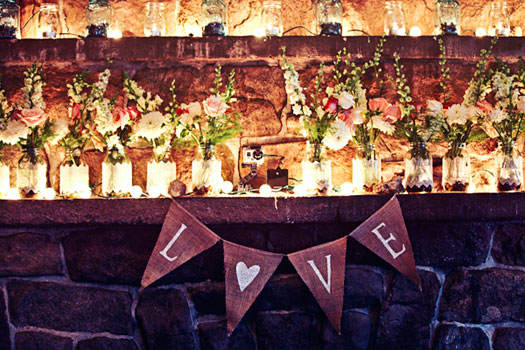 My advice:  Before other people start dishing out their opinions, take the time to figure out what’s most important to the two of you. Figure out what you picture the day to look like and who is there, and don’t let the ‘rules’ scare you. Your bridesmaid dresses don’t have to match, you can have more bridesmaids than groomsmen, you don’t even have to carry a bouquet if you don’t want to. That – and don’t be afraid to break your own rules. For example: I told myself I didn’t want to get married outside and I didn’t want a short dress. I promptly broke those rules when I found my dress and venue.

RECOMMENDED VENDORS
I chose vendors whose work I admired, but also vendors I connected with and who I felt understood my ‘theme.’

Photographer: Marianne Brown Photography – highly recommend. She has a beautiful, ethereal style without the pictures being over-the-top themed. She is very calm and organized, which is just what I needed. She helped plan the day-of schedule with me, and told everyone where to go and what to do when we were taking pictures. She also had fun with it!

Venue,  & Food & Lodging: Marys Lake Lodge & Resort, Forever Garden.  The venue is gorgeous, and the ceremony site convinced me to have an outdoor wedding –something I swore I wouldn’t do. The food was delicious!

Florist: Kim and Company – highly, highly recommended. Kim got my vibe right away, and started throwing ideas out that were even better than what I had in mind. She is sweet and easy to work with, and responds well to email. And, the final product was breathtaking.

DJ: MC Johnny Cruz Mobile Brian was great and I recommend him. He had a lot of songs, including a few Texas Country tunes we didn’t expect him to have, and he was also very helpful in laying out a day-of schedule and helping us stick to it!

Videographer: Media Center Colorado; highly recommended; my dad actually works for the company, but they also do amazing work. They made the effort to get interviews from all of the bridal party, and the Go-Pro’s were the icing on the cake. They also put together the amazing video we showed.